Ana Vizcarra Rankin is a native of Maldonado, Uruguay. She received her Bachelor of Arts in Art.

June 2013: Voids that Bind installation at the Crane Project Space

Jan 2014: The Void that Binds solo exhibition at Goggleworks

What themes and concepts does your work generally revolve around?

My work is about migration, pilgrimage and nomadism, with some heavy environmentalist undertones. I am inspired by travel. Going to a new place or returning to a familiar favorite inspires such strong feelings for me, that I think they are the most powerful catalysts for my work.

What materials do you work with?

The large map paintings are mostly aqueous media on unprimed, un-stretched canvas. I use watered down acrylics to dye the background, and then I start laying out the landmasses or star groupings in charcoal (depending on whether I’m doing a terrestrial or celestial map). After the initial layer, I use gesso to block out areas of interest, and acrylic washes to create more layers. Some maps have a dozen layers of gesso, acrylic and line work, which I do in charcoal, oil pastel and paint pens; I often cover up areas knowing that I’m going to sand them down later to unearth what was underneath. This way, each painting is a sort of archaeological dig, with bits of land or stars fading into the background or coming to the foreground based on the order they were painted and whether or not I have sanded down or scrubbed off recent layers. My tools include palette knives, brushes, rollers, and an increasing number of sponges or various sizes and textures ranging from large and soft to thin scourers. I just finished a star map called “Late Feast in June,” where Saturn and Mars are at the bottom left of the painting. Being the most visible lights in the sky that night and the basis of the composition in my notes, I started out emphasizing the two planets, but as I was finishing, I noticed Saturn was buried about three layers deep and had become invisible, so I used some silver foil to bring him back up to the foreground – wouldn’t want Mars, the God of War to get ALL the attention.

What are you currently working on?

Currently I am working on paintings and objects for an installation in the Crane CurArtorial Lab. It will be made up of at least one large map painting, several dozen redacted hotel keycards and some gilded apples and garlic.

What kind of creative patterns, routines or rituals do you have?

I am always taking notes of the stars that are out when I go outside on a nice night, and doing a lot of research about land use, space exploration, post colonial behavior and all sorts of seemingly unrelated stuff. I work from a combination of ideas, memory, notes, sketches, reference photography, and existing maps.

Anytime I’m on the road or the water or in the air I feel compelled to record those experiences. I have perfected my watercolor “traveling studio” so that it’s TSA approved. And my large map paintings fold down to carry-on size so I can take them with me on the plane.

What’s your art background / when did you begin really focusing on art?

I was very, very lucky to be constantly surrounded by the arts and creative people in my early childhood. My uncle is an artist and would babysit me before I started school; he put a crayon in my hand when I was just as likely to eat it as draw with it, and once I did start school, which was only 4 hours a day in Uruguay, I was sent to an after school art program at a place called La Casa de la Cultura. I see that as the beginning of my art education. I learned charcoal drawing, watercolor, and egg tempera painting, while surrounded by kids learning to play instruments and dance.

After moving to the US I had a wonderful high school art teacher, Ms. Boren, who kept me sane during those hormone fueled years of culture shock and transition. I tried going to college for painting but ended up in architecture design instead- almost graduating in 1999. Almost ten years passed before I went back to school, but I kept making art the entire time, even securing gallery representation. When I did return to school in 2007, I received my BA in Art History summa cum laude from Tyler and my MFA in studio art from PAFA, winning the Caldwell purchase prize for the Academy’s permanent collection in 2012.

What’s been happening in your life/ what’s next for you?

My studio building, 915 Spring Garden, held their Spring open studios in April, so I had my door open for that. I love open studio events because it’s like throwing a party at your house where you get to see a bunch of old friends and meet new ones. Plus, my favorite collectors tend to buy directly from the studio so it’s always great to see one of them walk through the door. That’s when you break out the sparkling wine.

I had a painting on view in a group show at Rowan University Gallery called Cosmobilities. I had an installation titled Voids that Bind at the Crane, and in January 2014 I have a larger version of that installation planned for one of the large galleries at Goggleworks, in Reading PA. I have a works on paper exhibition at the Random Tearoom in October, concurrently with Philadelphia Open Studio Tours.

Describe your current state of mind / what’s inspiring you?

Most recently I have been rediscovering the mountains. I am always working on a portfolio of small watercolor paintings done plein air using local water wherever I go, which is mostly the coast when I get a chance, but this time I used snow from the Vermont Mountains! It was brilliant. Our first evening there, the moon was almost completely done waning and Orion broke out through the clouds and I kept thinking “how can I keep this water from freezing so I can sketch this sky outside?” I ended up taking some notes in my sketchbook and saving the watercolors for the next morning when the snow-water could stay liquid in the sun.

Do you have any exhibits coming up/ past exhibits you’d like to mention?

I had a painting, “Late Feast in June” on view at Rowan University.

I exhibited an installation at the Crane Project Space. I call it Voids that Bind; there was a line of redacted hotel key-cards and gilded fruit and some bones along with a map painting or two.

In January 2014 I have an installation planned for one of the large galleries at Goggleworks, in Reading PA. I have a works on paper exhibition at the Random Tearoom in October, concurrently with Philadelphia Open Studio Tours.

Is any of your work political?

Maps are political, and making art about maps is political. My agenda, if you can call it that, is broad spectrum: non-dualism and ecological responsibility. Beyond that I don’t nitpick.

What are you trying to communicate with your art?

Hopefully my work will remind people of a time they went somewhere and experienced something and connected them to someone or something else. It could be across the world or out their front door. I am hoping to evince some kind of empathy. We are so lucky to be in these amazing bodies living on this marvelous, unique world. There is this sense of urgency right now having to do both with the physical health of humanity and that of the planet. If my work can get even one person to reconsider a previously unquestioned belief about nature and its value, the importance and consequences of travel and mobility, then that is a good thing.

Which creative medium would you love to pursue but haven’t yet?

Glass. I want to blow and cast and slump some glass. I took a semester at the new Tyler shop in 2010 and I think now I’m done with my MFA I need to get back to honing that craft within my overall practice. I keep thinking about big light bulbs and metal dipped goblets that sing and stuff like that.

What is your dream project?

I’d love to design and install something large scale like Pollen from Hazelnut by Wolfgang Haib, or anything by Anish Kapoor, or Ai Wei Wei’s Sunflower Seeds. Maybe a giant map surrounded by carefully concentric circles of gilded fruit.

Are you involved with any organizations/ do you collaborate with other artists?

I’m a Philadelphia Chapter member of the Women’s Caucus for Art since 2011. Then national organization holds a conference in New York that brings out some pretty amazing ladies. I had an image in the Bound exhibition catalog that was part of a concurrent exhibition at the 2013 conference. It was very exciting to meet everyone.

What are you reading?

Neal Stephenson’s Baroque Cycle, for the second time, in the bedroom. Against the Day by Thomas Pynchon, in the living room. Carrying The information, by James Gleick and 12 Million Dollar Stuffed Sharkby Don Johnson.

The Information by James Gleick and 12 Million Dollar Stuffed Shark are on my kindle, so that’s what I’m reading on the road.

Sandman comics forever. I still identify as Death- she is one bad bitch and I love her.

What are you listening to these days?

I’m going through a heavy classical music phase. Dvorac, San Saenz, Hayden, Paganini, Vivaldi, and Mozart and Bach and Beethoven – sometimes I fall totally in love with the silence in classical music and everything else sounds jarring.

What is one of the most recent shows you attended?

Starwood and Mindless Self Indulgence at the Electric Factory.

What was the last exhibit you attended?

This is not the most recent exhibition I have attended, but it is the one that has recently impacted me the most: Pollen from Hazelnut Tree at the MOMA by Wolfgang Haib. I am still not done digesting what this installation did to my brain. I want to see more like it.

What was the first piece of artwork you bought/ do you buy a lot of artwork?

I mostly trade with other artists. The most notable trade is probably the tattoo on my leg, by Steven Clark. It spans from my toes to mid-thigh, and took over thirty hours of work over the course of two years.

Favorite artists and why/ people in your field whom you most admire:

Bonnie MacAllister is a hypernexus, Anabelle Rodriguez is the curator with the mostest, Mark Blavat is an art-think guru and that’s just the first three that come to mind. Philly is full of amazing people. 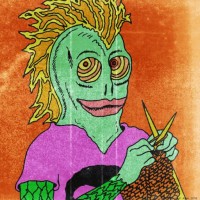